For lovers of the English Language
http://wordwizard.com/phpbb3/

by trolley
Here's my new word for the day (and it's not even 10:00am). I was looking for a new spare rib recipe. It suggested that I use a slow cooker or, alternately, I could cook them "on the hob". I've cooked things "on the fly" and I always cook ribs "on the bone" but if I'd ever cooked on the hob before I didn't even realize that I was. It seems that a "hob' originally meant a shelf on the fire hearth that could be used to cook or warm food. Now, it refers to the cooking surface (usually above the oven). To me, that area is called the stove. If it is not attached to the oven, then it is a cooktop. Does the hob mean the entire area or is it what we call the "burners." The burners are the individual areas of the stove or cook top that heat up. In many commercial kitchens they cook on a flat top or griddle where the entire surface heats up and you can place pots and pans anywhere on the surface. My gas stove has four individual burners on the top. Do I have four hobs? I'm not trying to be greedy...up until 15 minutes ago, I didn't even know I had one hob.

by gdwdwrkr
My cabin cookstove "hob" offers a variety of cooking options. You can grill on the flat surface above the oven, with its varying heats, or you can cook in a pan on one of the plates, which plates can be lifted off and the pot set directly over the fire.
I'd say you have one hob and four plates.

by Phil White
Could be another UK thing. In most modern kitchens, you have two (fitted) appliances for cooking. The "oven" and the "hob". The oven is the enclosed space with a door in which you roast things, bake, make casseroles, etc.

The other appliance is usually fitted on top of the oven and usually comprises 4 "rings" which apply direct heat to saucepans or frying pans. Each heat source is usually called a "ring", whether it is gas, electric or induction. An electric ring is sometimes called a "hotplate", but I think that usage is dying out as ceramic hobs become increasingly widespread.

If you have a standalone unit with a combined oven and hob, this is often called a "cooker", sometimes a "stove", sometimes an "oven", but we would still refer to "cooking on the hob" when using the rings.

One of the UK's biggest independent online white goods suppliers divides its "Cooking" section into "Ovens", "Cookers" and "Hobs": https://ao.com/cooking . That tallies with my understanding.

Some standalone ovens will also have a griddle alongside the rings. I really am not sure whether that would be regarded as part of the hob, but I am pretty certain that if it were used, it would not be regarded as "cooking on the hob".

by BonnieL
I don't have a fireplace, so if one of my old cookbooks said to cook something "on the hob," I would guess that slow cooking in the oven would be closer to what was meant than cooking on the stovetop.

Hobs are mentioned in a lot of older books. If memory serves me right, it's usually hot water that's kept there, or food is being kept warm. Maybe that's all the author knew about cooking on the hob.

My mother's old stove (wish I had it) had a warming oven - I think that's the equivalent of a hob.

by Phil White
As I said, in the UK, "on the hob" explicitly means "not in the oven". Cooking on the hob means cooking in a saucepan, stock pot or frying pan with direct heat from the bottom.

Generally, I would only use "on the hob" in cases where it is possible to cook similar dishes either in the oven (e.g. casserole) or on the hob (e.g. pot roast). Thus, for example, many Indian dishes are traditionally cooked "on the hob", but I will often adapt them to cook them in the oven.

by tony h
I am fairly sure the British use of hob (being the rings separate from the oven etc) was purloined by designers in the 1970s when built in units, and eye-level-ovens were available to the kitchen designers.

We British also have a "range" being a cooker incorporating more than oven. Where these are solid fuelled, or more commonly oil fuelled, they have solid tops with hot-plates that vary in temperature across the surface. Typically hot at the front, simmer at the back. The most prestigious brand for these is AGA although I don't think they make the solid fuel ones anymore.

Nowadays I would tend to associate hotplate with one of those sideboard or tabletop heated things for keeping dishes warm.

I also tend to think that a stove is simpler than a cooker although the Venn diagrams would show some overlap.

by gdwdwrkr
The Venn diagram reference got me thinking...how cool would it be if the circles under the glass-top intersected in such a way that you could customize them for oversize pans...simmering gravy in the roaster-pan, for example?
Then I thought that making it a touch-screen would be cool. Except it gets real hot. Bad idea.

by Erik_Kowal
Similarly, Rocky Mountain oysters are not oysters.

by trolley
...and, over here, "hot-plate" usually refers to a portable, one or two ring cooking device. These are often used as a substitute for a full-sized stove and are common in student dorm rooms or "bachelor suites" that do not have a kitchen. Devices used on a side board or buffet table to keep food warm are "warming trays" or "chafers". They usually have a maximum temperature of about 200 F.

by gdwdwrkr
Same down here.
Edit;
And from a site called Hunker.com:

The earliest cast iron stoves were called five-plate or jamb stoves and were of German design. The 1740s brought six-plate close stoves and Benjamin Franklin's "Pennsylvania Fireplace." By 1760, 10-plate stoves with an oven and two hinged doors appeared in what was probably the first true cook stove.

wherein "plates" were the cast-iron surfaces which were bolted-together to form fire-boxes.

The entire top surface of a cook stove is used for cooking and is called the hob.

The round plates on the hob are called “eyes”

(I have not figured-out how to include pictures, but they're pretty good at the prepper site.)

by tony h
Now that's a fancy olde woridy look. The last one we installed looked more like this one 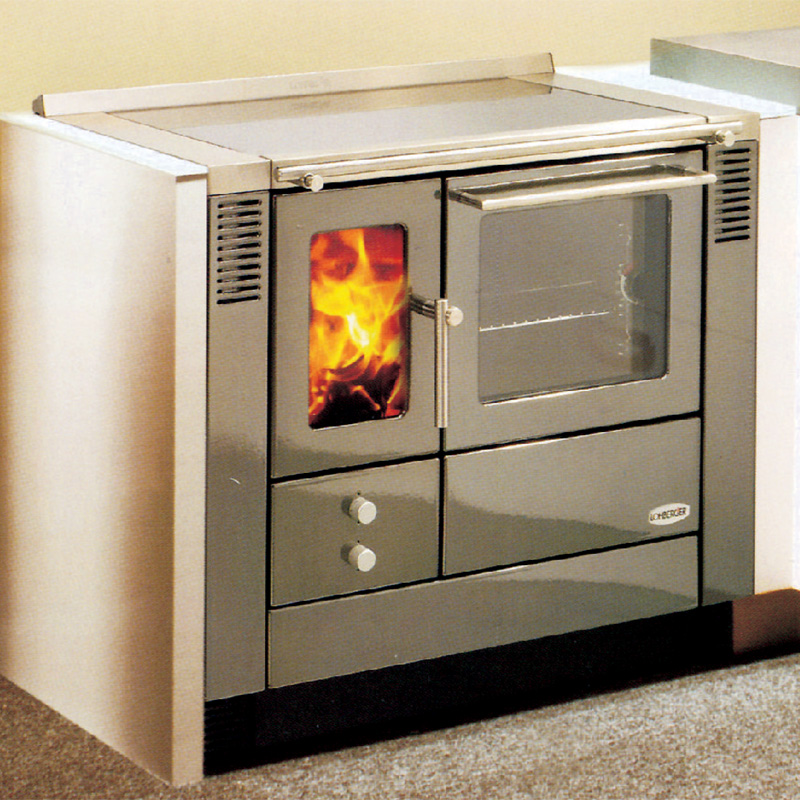 Phil, have you used any of the voice-command virtual assistants. I’m sure there must be something out there that would be capable of turning a stove off and on. My only experience is with Siri (on a six year old iphone) but I understand they have come a long way in the past couple of years.


“Alexa, turn left front ring to high”
“I’m sorry, Phil. I don’t understand left front ring too high.”
“ Turn. Left. Front. Ring-“
“ I’m sorry, Phil. I am incapable of turning left and my name is not Frontring. Would you like me to change my name to Frontring?”
“No, damn it! I’m just trying to make a cup of tea!”
“Shall I Google How to Make Tea?”
“Oh, sod off”
“Googling “sawed-off”. I found this Wikipedia article “for sawed-off shot gun”. Shall I read it to you?
Sigh…”OK, then. Thanks”

by Phil White
Actually, the RNIB site (Royal National Institute for the Blind) sells voice controlled microwave ovens that also talks back to you. At between ten and twenty times the price of a simple one with two knobs. I dread to think what a proper oven and hob would cost!

If I can light my own pipe without cooking my nose or setting fire to my hair, I am bloody sure I can operate a couple of good old, chunky knobs. I don't want an obsequious sodding companion oven! And certainly not for twenty times the price.

Don't get me started!
All times are UTC+01:00
Page 1 of 2
Powered by phpBB® Forum Software © phpBB Limited
https://www.phpbb.com/